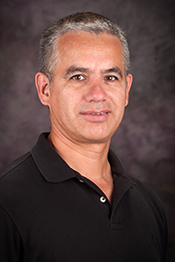 Dr. Jorge Valenzuela received a bachelor's degree in computer engineering from Monterrey Tech, Mexico, in 1990. Following graduation, he joined Petro Ensambels as a software engineer/team leader and worked there from 1991 to 1997. In January 1998, he came to K-State to pursue a master's degree in software engineering. After obtaining his master's degree, Valenzuela worked for Motorola as software engineer from 2000 to 2003. He returned to K-State in 2004 and received his doctorate degree in computer science in 2014. He then worked for the K-State College of Education as systems programmer for the Center of Intercultural and Multilingual Advocacy. He also worked as adjunct instructor in the K-State department of computer science from Fall 2014 to Spring 2016. Valenzuela currently holds an instructor/adviser position in the department.